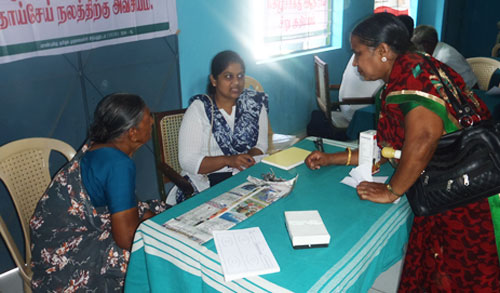 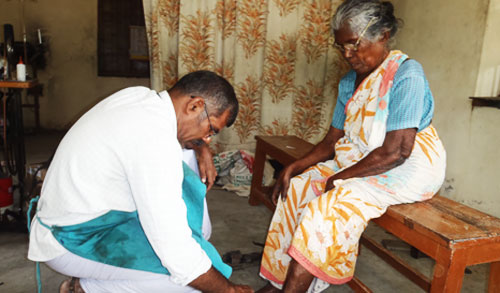 Leprosy patients have irreversible deformities such as loss of sensation, shortening of limbs and nerve damage. This loss of sensation leads to injuries of the hands, feet and of the eye. These ulcers have no pain, so infections and complications occur. This leads to visible deformities. We admit such patients. Bed rest, antibiotics and ulcer dressing for every one is done by medical staff and attenders. Minor surgical procedures & POP applications are also performed. The patient is taught self care i.e., care of hands, feet and eye. After healing of the ulcers, we provide protective footwear in the form of MCR chappals or special cuffs. During the stay in the hospital, the patients receive medicines, food, clothes and accommodation, free of cost. 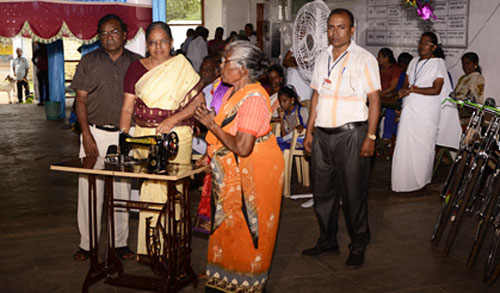 When a patient is admitted in St.Luke's Leprosarium for leprosy treatment, we call over the family members of the patient and give health education about leprosy, and teach them the care of hands, feet and eyes. Thorough screeing of the family members is also done. We teach the patient's relatives, how to care for the patient at home. The children are given free education. The essential needs of the family are met and they are economically supported by gifts of milch animals, sewing machines, load bicycle etc. We take complete responsibility of the patients to an extent that even their last rites (in case of their death), are also performed by the hospital. 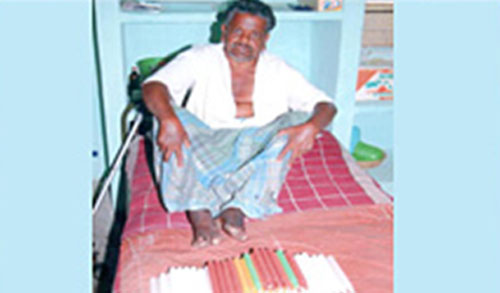 My name is Alphonse. I am 56 years old. I belong to the Washerman community. Due to leprosy and disability, I never got married. When I was 19 years old, some patches appeared on my left leg. I did not know that these were the symptoms of leprosy. So, I ignored them. After a few years, both my hands and feet lost sensation. The ear lobes thickened. My brother, with whom I stayed, feared that his children too would catch leprosy. The word spread in my village that, "Alphonse is a leper". So, I was sent out from my brother's house. Then, I went to my uncle's house. He kept me in the veranda of his house, and gave food to me, as to a dog.

After a few months, an ulcer developed on my foot. I fell down accidentally and my left foot got fractured. I was in a pathetic condition. One of the ex-patients of St.Luke's Leprosarium, Peikulam suggested that I go to Peikulam. After admission, the treatment was given free of cost. The ulcer healed completely. The elbow crutch provided to me gave me mobility and made me independent. I am very much interested in making candles because I have a bit of experience in it. St.Luke's gave me candle-frames and raw materials. This was very helpful to change my life. Now I am making candles and selling it to the well wishers of St.Luke's. I am not dependent on others for my own expenses. I am a self-reliant person now. 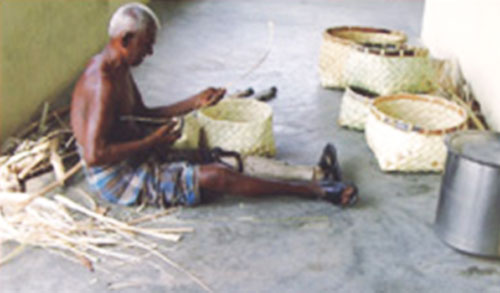 My name is Nambi and I am 76 years old. I belong to the scheduled caste. My wife died of tuberculosis many years ago. My only son got married and settled far away from me. Many years ago, I felt numbness with a peculiar sensation in both my legs. I went to a doctor of indigenous system of medicine who gave me some oil to apply on the affected area. But there was no improvement. After a few years, I lost sensation on both my feet. Due to this, ulcers developed on my legs. I went to Dohnavur Fellowship Hospital. After taking treatment, the ulcers were completely healed, but within a few months developed again.

A Catholic Father saw my pathetic condition and referred me to St.Luke's. In the hospital my left leg ulcer was diagnosed as cancer. To save me from the clutches of death, my left leg was amputated below knee and was fixed with an artificial limb. My fingers are not affected. I know basket weaving with palm-tree leaves. The Social Worker of St.Luke's encouraged me to do the same work. The materials and other equipment for basket weaving were given to me. I started my basket weaving work. Though I am old, I can make baskets and earn something to fulfil my needs. Now I do not depend on anyone anymore. 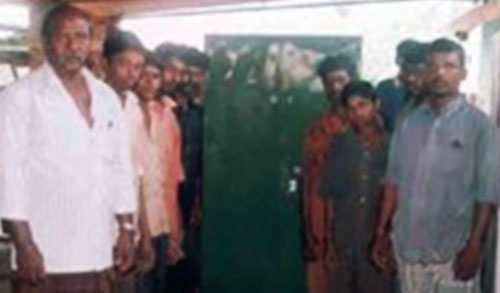 My name is Anthony Savarimuthu. I was a leprosy patient. But now, if you see my face and hands, you cannot make out that I was once affected by leprosy. I am very much thankful to St. Luke's Leprosarium, which has brought me a new hope in my life. I am from a poor family. My father was a toddy-tapper. When I was 11 years old, my left leg got paralysed suddenly (Foot-drop due to leprosy). I went to St. Luke's Leprosarium. They gave intensive treatment, including POP cast and physiotherapy exercises. A few months later, I had reconstructive surgery, which corrected my foot-drop. Now I am able to walk and am almost normal.

Then St. Luke's Leprosarium sent me to the Salvation Army Vocational Training Centre, at Aramboly in Kanyakumari District. I had thorough training in welding. Completing the course successfully, I returned home as a fully qualified welder. On the recommendation of St. Luke's Leprosarium, the bank advanced loan to me. I opened a welding workshop at Peikulam and we are fabricating steel doors/gates etc. It is a thriving business now. I am happily married. We have one daughter and two sons.

While Eeswari was still in her mother's womb, Eeswari's father deserted her mother. A few years later, she died. When Eeswari was ten years old, some patches appeared on her hands. There was practically no one to care for this motherless child and none to take her to a doctor. After a few years, the leprosy bacilli destroyed the sensory nerves of her hands and feet. One day she accidentally stepped on a sharp stone, which injured her right foot. She did not feel the pain of the injury and continued to walk on the injured foot. After a few days, the injury got infected and turned gangrenous. Septicaemia set in.

Then her father brought her to Peikulam leprosarium. Her right leg was amputated below knee to save her life. After the surgery, she was fitted with an artificial limb. She was given training in tailoring and embroidery and making of handbags and money purses. A sewing machine was gifted. Now, she is earning her daily bread out of these hand-works. Eeswari has married a fellow-leprosy patient Raman. They built a small house, a few years ago. St.Luke's helped with र 15, 000/- for the tin sheet on the roof of their house. In addition, St.Luke's gifted a pair of goats to increase their earning capacity. Now, Raman and Eeswari are a happy couple.

Mr. Mohammed Yoosuf belongs to Paththamadai in Tirunelveli District, Tamil Nadu. Paththamadai is famous throughout India for mat-weaving. When Mohammed Yoosuf was about 25 years old, some patches appeared on his body. At that time he was a cloths merchant in Trichy. He did not know that, these were the symptoms of leprosy. After a few months, the patches grew in size and number. So he went to Trichy Government Hospital. There the doctor examined him and gave leprosy treatment and advised him to continue the treatment for two years.

But, Yoosuf took the treatment only for five months and then discontinued the treatment without seeking any medical advice. Meanwhile he got married to Seyad Ali Fathima, and went to Malaysia. There he worked in a textile shop. Since Yoosuf had not taken complete treatment, the disease relapsed. Painful red nodules cropped up all over the body with fever and painful thickened nerves. He was unable to tolerate the pain. He could not work properly. His facial appearance changed. On seeing his terrible typical leprosy appearance, the textile shop-owner dismissed him from the job. Yoosuf returned to India. Both the hands and feet lost sensation and the fingers got paralyzed and deformed. The leprosy bacilli destroyed the nerves around the right ankle joint too.

Due to loss of sweating, the feet became very dry. Fissures developed on the right foot. But he continued to walk with the fissured foot. The fissure went deep and got infected. The pressure of hard chappals also ulcerated the left foot. He sat on the floor cross legged in the traditional Indian style. Due to this pressure, he developed an ulcer on the outer side of the right ankle joint too. This ulcer got infected badly. He was unable to walk. He became bedridden and developed pressure sores and ulcer on the left buttock.

An elderly man, who had taken treatment as an out-patient in St.Luke's Leprosarium for a skin disease and got cured, saw Yoosuf's pitiable condition and advised him to go to Peikulam. Thus Yoosuf landed in St.Luke's Leprosarium. On his arrival at Peikulam, a thorough medical check up was done. Yoosuf was still found to be suffering from leprosy and was admitted as an in-patient. Yoosuf had ulcers in the left gluteal region and both the feet. The ulcers were deep and were involving the underlying tissues.

Through a series of minor surgeries, the devitalized tissues were removed. Suitable antibiotics were given. The ulcers healed. Then dislocation of the bones around the right ankle joint was corrected surgically, and special footwear was given. Finally, Yoosuf was discharged. At the time of discharge, his deformities were corrected to nearly 75% of normal level. He went home with renewed confidence to restart a new life. He wanted to expand his mat-production business, but did not have the money.

St.Luke's came to his rescue, by endorsing his application and standing security. Guaranteed of repayment by St.Luke's, the bank loaned र 10,000/-. Yoosuf and his hardworking wife expanded their business. Today they are successful mat-weavers and dealers. 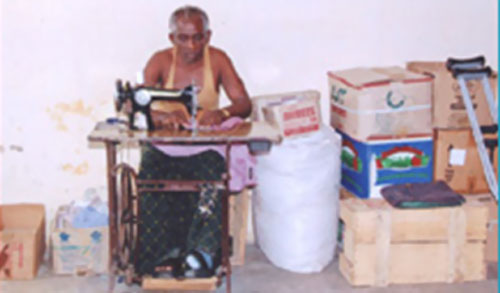 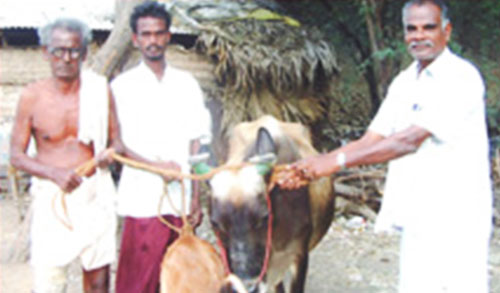 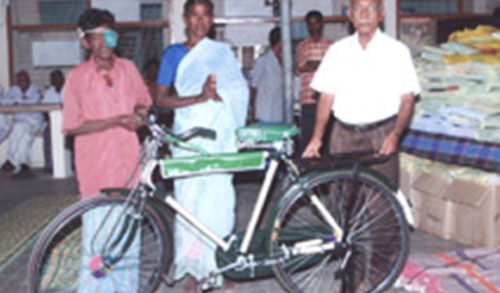 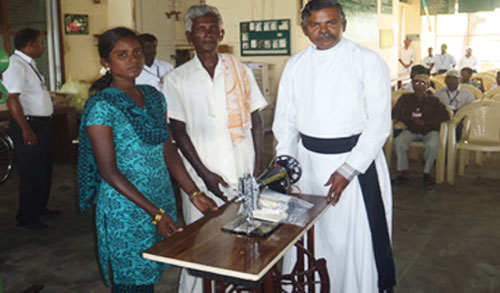 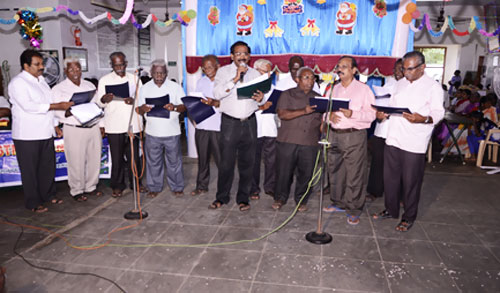 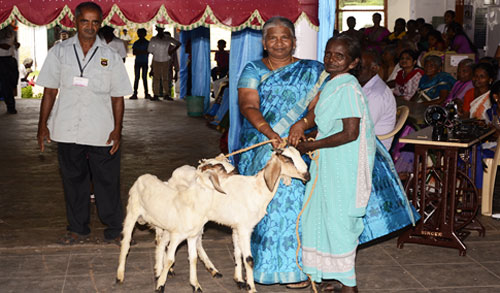 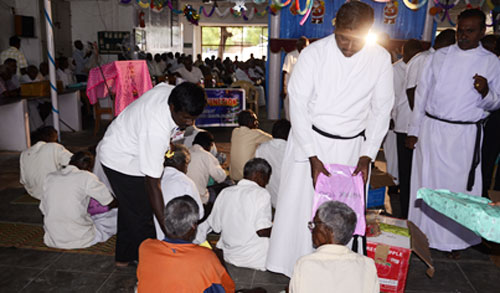 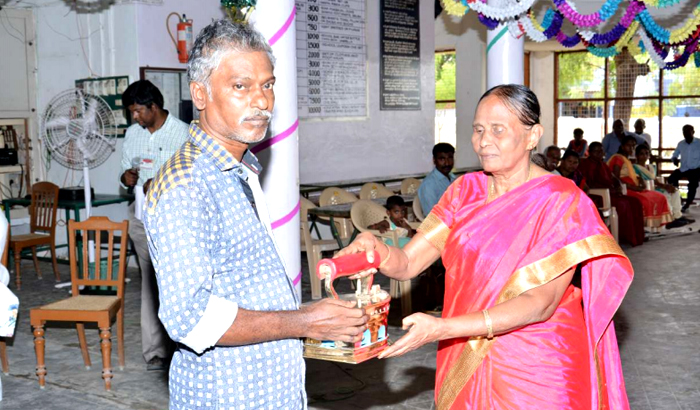 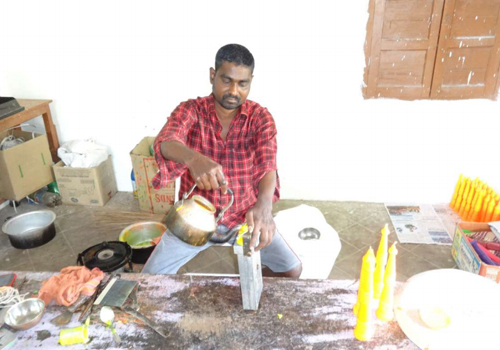